Continuing on with my Californian road trip, I felt San Fransisco and went to the seaside town of Monterey. It was only about a few hour drive away mainly on highways but we did get to drive through Silicon Alley see where all the major technology companies offices were.

However, what was a highlight of the drive was that due to early check-out of our Airbnb we had to didn’t go out for breakfast but elected to go to Whole Foods instead for something to enjoy along the trip. Straight-up this isn’t the most healthiest sandwiches (but far from worst) and is high in calories due, OMG everyone not just plant-based eater but everyone needs to try their deli’s Smokey TTLA sandwich (see I am not the only one). It is a simple sandwich but boy does it pack a flavour punch. It a half a slightly toasted ciabatta roll spread with fresh garlic aioli, hot smokey tempeh bacon, fresh tomatoes, lettuce and avocado. It is a massive sandwich, so initially thought would just have half but the other half only lasted a until we got to Monterey it was that good (proud of myself for showing that level of restraint). As we were all sat in the car my poor family just kept hearing me glorify this sandwich and so much so that later in the trip as I had been dreaming about it so much we stopped in another whole foods so that we could also get one to have.

Now back to Monterey and I need to give a bit of context on why this was a two-day stop on our road trip (it should be regardless for a day trip or so). As many of you are aware from earlier post my nephew is Obsessed and I don’t use that lightly with animals and I mean all animals. The whole two hours drive we played multiple variations of the animal game. However, one of his top three ultimate favourite animals is Otters. Many of you might not be aware by Monterey is a lovely seaside town, right there on the water and the home of native Californian sea otters. There is makes sense there is an Otter Conservation centre there. Therefore at its core we went and stopped in Monterey not just because it is a lovely town but it has tonnes and I mean tonnes of Otters both in the wild and be rehab back to the wild.

Just entering into Monterey you could tell it had that small-town Californian vibe and was modern but with tonnes of history and stories behind it (enough for Steinbeck to write a book). I didn’t know where we were staying but when we drove up to Monterey Plaza Hotel I was in awe, it is a massive hotel right on the water, so so beautiful. I was going to be sharing with my nephew which was fun and it very nice beyond comfortable hotel. The biggest selling point for me (even if you exclude my nephew and by proxy my sister’s obsession) if you have a room overlooking the water you are give binoculars so you can look and watch the otters in their kelp nest and also the seals that live there. 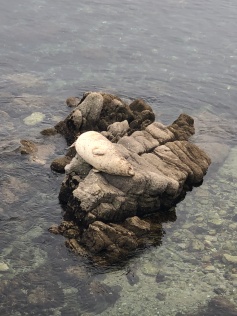 The noise when I open our door of the waves, seals and squeaking otters was too much. The joy we all got when my nephew (and even more my sister) saw the Otters in the wild for the first time was too much. The seals also just sit and lay on rocks sometimes which are barely out of the water just makes you smile watching them.

First otter fact of this trip – Otters sleep holding hands – I dare you to google you heart will melt I promise you. You will fall in love with Otters as much as my family has after learning more about them.

On that first day we just want to go for a good walk and just explore the town a little, so we decide to walk along the harbour, 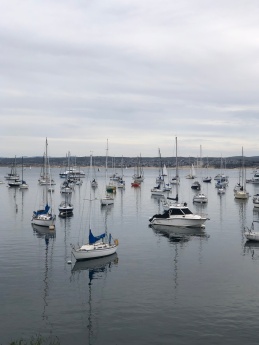 which is so picturesque. I can tell you how lovely and calm this town is and it really has that true homespun Americana about it which I love as you don’t get it as strong in the big cities.  I appreciate just the smell and sound of the water alongside the seals and otters making their little sounds just made a great atmosphere. We went to the Pier which is one of the highlights of the small town, don’t go with too many expectations but is very quaint with you normal tourist driven restaurants, men fishing, boat trips around the harbour but the best part is the old-fashioned sweet shops. As a plant-based wasn’t the pick’n’mix that pulled me in but the signs for frozen bananas. Sadly we couldn’t find a store that didn’t do it cover in milk chocolate which was such a shame. My mom would also freeze banana and give them to us to have as ice lollies when we were yummy, and I do truly believe that fruit make the best lollies.

I always find that when I am near water and especially if I can hear it I am that much calmer and sleep better which I was very thankful for with my daily early starts. I can’t tell you how much that wonderful balcony on the water helped me whilst staying in Monterey. I was having to work whilst on holiday between 4am-9.30am and because I was sharing a room with my nephew I didn’t want to watch him so I relocated to the very dark and a little chilly balcony with my laptop did my calls, work and emails. I was tired at this point, I was over the jet lag so that was way too many early morning now and was frustrated. However, I had been sitting there quite happy to just be listening to the seals and the water being calmer than would have been otherwise when I was given a true life lesson – the sun started to come up. I haven’t watched a sunrise like that before it was so colourful and vibrant and so calming.

As you can see from the slideshow is was such a beautiful transition of colours and the sky just came alive, which when you add in the sound of the seals and water is truly magical. I took a moment every few minutes from my laptop to just look up and enjoy and said to myself repeatedly if I hadn’t had to work I would have missed this sunrise and it will never happen again and I felt very fortunate and lucky to be in that exact place in that exact moment – I was in the now.

Now on to the main reason we were in Monterey to start with the Monterey Bay Aquarium, a truly fantastical aquariums. 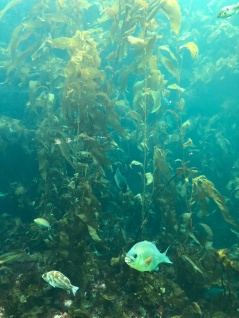 As part of the aquarium is a sea otter aquarium and they do have some of the rescued otters who can’t go back into the wild on display but also use them to help nature and give support to other otters who can recover and go back to nature. We were even able to go on a backstage Otter Conservation tour, where then gave a quick guide to some of the exhibits include the massive Kelp Forest (an Otters nature habitat in the wild) and also backstage and tell us who it all works. It was really educational and interest and the guide was too cute and sweet that I wanted to eat her up, she had just won an award for how long she have been volunteering. There is so many exhibits you could easily send an hour day there and maybe just able cover everything.

It has interactive touch tanks, big and small displays, so many different exhibits from sharks to octopus to under the sea deep tank. I did love the more visual tanks such as all these little mackerel which are swimming as great speed around you in their school. To the excellently light jellyfish tanks and the majestic jellyfish slowly floating around their tanks and there was so many varieties on display. It is

all very modern but you also know at it core is also about conservation and learning which makes a big difference. I also to again get over my fear (irrational fear very well aware of) of petting a stingray, still very tentatively at the moment but working on it. Overall, I have to stay was very impress and would go as far as saying it was probably one of the best aquariums in the world and definitely worth a stop in Monterey for, while for a day or two just so you can also just take and moment and sit by the harbour and be still.

On our last evening we all decided that we wanted to drive out to Carmel and explore there was a little bit. We only went late afternoon so couldn’t go down to the beach sadly. The town is stunning again got that clean, sweet, modern Americana feel about it, definitely more affluent home town though. 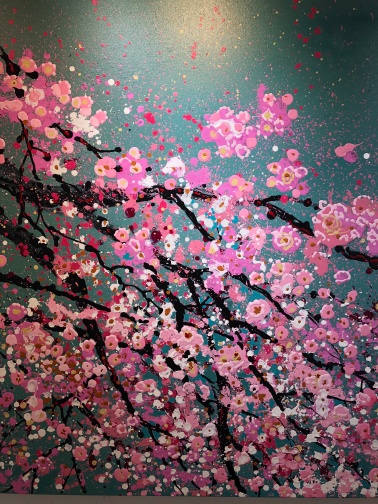 We walked around the shops and did a bit of window shopping. Whilst walking around we all stop to look at this beautiful art in a Meuse gallery window and had to go in. It was work by artist Simon Bull and we all fell in love with it, they are very modern and was after he was commissioned to be the artist for the Washington cherry festival. Is truly stunning and I wish I was able to purchase a piece of his art. If like me you love art, I do encourage you to go look at his site as some of his pieces are stunning. Just the texture, movement and colours all just work together and create a response out of you which I believe all good art should do.

Then it was time to move on to dinner and we had booked La Bicyclette which had also been recommended to us by the gallery owner. It is an Italian with pizza and beyond, and all very fresh and clean flavours. They were very kind and really helpful with making dishes plant-based friendly (which in the States is so much easier which a shame for UK). The food really delivered, we shared a starter of roasted brussel sprouts (as to remove the chorizo for me)  which were done with basil and preserved lemon so were beyond good (sadly no pictures as poor lighting aka mood lighting). They were crispy but also a little juicy with lemon dressing on it. Then I had their mushroom pizza san mozzarella with three types of mushrooms, caramelised onion jam and truffle oil. You would think it would have been very heavy but it wasn’t they had good a good balance and didn’t over do it with any of the toppings. It was so good I had to get my sister to have a big to share the joy. We also had some lovely local wine to go with the meal and it just ended up being a very nice intimate family meal. I would recommend for both families and couples a great little spot.

All was left another early morning but too cold to be outside on the balcony with the view sadly and we were back in the car for the rest of the adventure with a road trip down to Los Angeles.

This site uses Akismet to reduce spam. Learn how your comment data is processed.